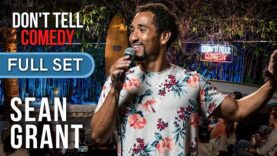 Comedian Sean Grant got his start performing standup at a strip club but discovers God is the greatest comic out there.

Subscribe to Don’t Tell Comedy to find your next favorite comedian:
http://bit.ly/dtcyoutube

Don’t Tell Comedy produces weekly shows in over 45 cities in the US by transforming unique spaces like backyards, surf shops, and warehouses into locations for a one-of-a-kind comedy experience! The location is kept a secret until the day of the show and the performers are a secret until they hit the stage!

Sean Grant is a hilarious LA based comedian that performs all over the country.

Don’t Tell Comedy Secret Sets is a YouTube Series featuring short sets from the best of the next generation of stand up comedians filmed at the most unique Don’t Tell Comedy locations. As is tradition with DTC events, the location isn’t revealed to ticket purchasers and the lineup is kept a complete secret.

Kids Don’t Kiss Like They Used To – Comedian Blaq Ron

I Got Sentenced to Joint Custody – Comedian Brooklyn Mike Troy

We Need To Stop Loving Everyone – Comedian Kasaun Wilson

The Watermelon Joke That Saved Me After I Got Pulled Over

We Need To Stop Loving Everyone – Comedian Kasaun Wilson

Kids Don’t Kiss Like They Used To – Comedian Blaq Ron

I Got Sentenced to Joint Custody – Comedian Brooklyn Mike Troy

Women Are Quick To Roast Your Feelings – Pierre